There’s nothing worse than scratching or taking a nick out of one of your pristinely kept golf clubs, but are dented just cosmetic, or do they harm your club’s performance?

Depending on how large or how small a dent is and its placement on your golf club, a dent can have either a large impact or very minimal impact on the performance of your clubs. That’s why it’s always important to look after your clubs and prevent them from getting damaged.

In this guide, I’m investigating how much effect having a dent in your golf clubs can be. I’ll be delving into how dents and scratches can change the aerodynamics of your clubhead’s flight and how that can change your ball’s flight, and also the power you can get on each shot. Let’s start by asking the key question – do dents affect golf clubs?

Dents will affect the performance of your clubs. A dent can change the aerodynamic properties of the club, giving it both less stability and power as you strike through your shot. The imbalance of air around your club caused by a dent can cause your ball to fly off at unpredictable angles.

Golf clubs are like airplanes. They rely on the smooth transitioning through the air to generate enough speed ahead of the golf ball to force greater power through the shot and force the golf ball into the air and down the fairway.

Now, most clubs, especially your driver, are custom designed to ensure they push air away from their clubfaces and towards their heels so that you can generate enough kinetic energy to smash through the golf ball and drive it into the air.

In my expert’s guide on why it’s harder to hit a lower lofted driver, that you should read I go into more details on the kinetic powers that are involved in generating greater ball-striking power using your clubhead. I also touch on why drivers are built with aerodynamics in mind, but in short, the importance of a driver’s aerodynamics are vital to helping you strike clean and powerful shots off the tee.

That means if you have any dents, scratches, or nicks in the casing of your driver’s head or on any of your irons, you’re going to see a difference in the type of shot’s you’ll hit simply because the dent is changing the way that air is transitioning over your club on your downswing. A dent can therefore alter the angle of impact your club has on the ball. It can force you to slice, hook, or even top your shot and change the amount and direction of spin you’re adding to your shots.

It’s essential to look after your clubs to ensure you don’t dent or scratch their heads. And if you get a dent in the face of your club, you might as well consider that club no longer fit for purpose as it is tough to replace a clubface on a golf club. For more information on how best to transition your club onto the golf ball to get greater distance off the tee, look at my guide on how you might be striking the ball wrong and what you can do to get a better connection on the golf ball.

Can You Get Dents Out Of Golf Clubs?

You can remove dents from golf clubs, but results may vary on how big the dent is or where it can be found on your golf club. Dent repair can be costly, and in some instances, purchasing a new club may be more worthwhile than a repair.

Like removing a dent from a car, you can remove a dent from a golf club. Golfers may want to think carefully about the dent repair price as it can sometimes be more worthwhile to purchase a new club.

As I’ve discussed previously in my guide, Is golf the most expensive sport? I talk a little more on how much golfers should expect to outlay on their equipment and maintaining their equipment, and the best way to not have to pay to remove dents from your clubs is to not get dents in the first place.

Put it this way, if you look after your clubs enough, cover your club heads with cushioned club head covers, and don’t strike your clubs from hard surfaces, you’re going to inevitably save yourself a ton of money on clubhead dent repair. Particularly in transport, your clubs can bang and knock into each other. To stop this, you should purchase these cushioned leather iron headcovers from Amazon.com which, can stop you from paying $200 on a club dent repair. 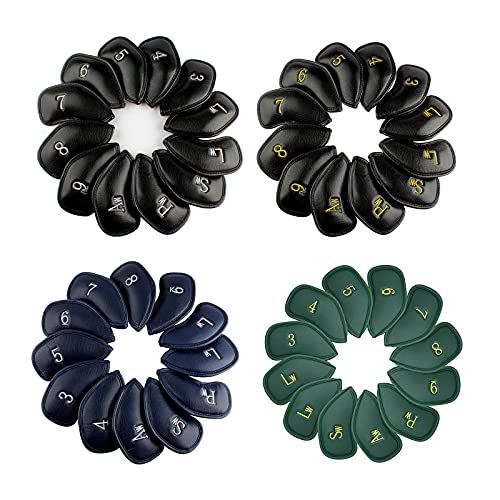 Prices pulled from the Amazon Product Advertising API on:

Product prices and availability are accurate as of the date/time indicated and are subject to change. Any price and availability information displayed on [relevant Amazon Site(s), as applicable] at the time of purchase will apply to the purchase of this product.

How Do You Fix A Dent In A Golf Club?

To avoid causing more damage to your golf clubs, it’s wise to employ a professional to fix your clubhead dents for you. Professionals will smoothen the dent by drilling into your golf club or shaving down the head on your irons and evening the discrepancies on the club.

Fixing a dent in a golf club is a challenging task. Depending on the size of the dent and its depth, golfers may need to drill, carve or grind out the discrepancies in the club and for that reason, it’s best to leave this process in the capable hands of a dent repair specialist.

They will usually drill into the club, insert special clippers that will push at the sides and the middle of the dent, and bring the club back into its correct alignment. Particularly for aluminum or titanium drivers, once a club has sustained such a dent, there can sometimes be a weak spot where that dent existed before.

That means players will need to be careful not to strike that spot again in the future, as they could risk even more damage. You can place tape over the weakened spot to try and keep it sturdy.

For this reason, it’s also advisable to avoid buying expensive clubs like a driver if you know that your clubs may not have a long shelf life or if you like to smack your clubs around a bit on the course or the range. For more advice on buying high-value golf clubs, take a look at my articles on why it’s best to avoid purchasing expensive drivers.

But when it comes to repairing dents, my top tip is to try not to get a dent in the first place, but if you do find yourself getting a couple of dents and nicks in your clubs, it’s wise not to try to fix the issue yourself as you could do more damage. Take the club to your nearest club head repair specialist or club manufacturer, and get them to repair the problem for you.

link to How To Make A Golf Cart Ride Smoother?

Some golf cart rides can seem quite rough and bumpy. Bumpy golf rides can be due to a lot of reasons. Read on to find out what makes golf rides rough and how you can make the ride smoother. We have...

Continue Reading
link to Confused About When to Upgrade From Beginner Clubs? My Story

I have been a golfer for over forty years, and during most of that time, I have been an eight handicap player. In this article, I will try to clarify any confusion regarding when to upgrade from...

Our mission is to make this site the most helpful resource it can be, for all levels of Golf. From the best equipment to buy, and tips for wedge, driving, iron-play, and putting we have everything covered to help you be the best Golfer you can be.

I AM HIRING WRITERS! Please email [email protected] for inquiries

This site is a participant in the Amazon Services LLC Associates Program, an affiliate advertising program designed to provide a means for sites to earn advertising fees by advertising and linking to Amazon.com. We are compensated for referring traffic and business to Amazon and other companies linked to on this site.